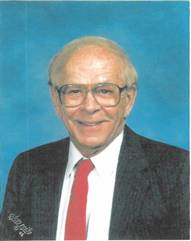 W. Donald Heisel was referred to in a 1988 article in The Cincinnati Enquirer on public administration as “The Father of Public Administration” in Southwest Ohio. The reference was an acknowledgment of the number of public administrators whose professional development had been assisted by Don Heisel. At the time of his death in 1998, Heisel’s students held management positions in many of the local governments in the Greater Cincinnati region. He felt himself to be honored by this service. Don Heisel’s students and mentees are still to be found in many of the cities, villages, townships, and counties in Ohio and Northern Kentucky. Many others were trained by his protégés.

William Donald Heisel was born the youngest of three children to William Heisel and Jewel Bruce Heisel on August 14, 1914, at their home in Cincinnati’s Northside. He learned responsibility early, helping his father in the grocery store he operated in the West End starting at age eight. Raised during the depression, Don learned to conserve resources. However, since his father ran a grocery store, he did not suffer true privation. There was always food on the table and his parents were never in danger of foreclosure on their home. “We ate whatever hadn’t been sold,” he often reported.

Don graduated from Western Hills High School and attended DePauw University in Greencastle, Indiana, on an academic scholarship. He was the first member of his family to attend college, an opportunity that was available to him only because a caring teacher had gone to visit his parents and convinced them that they should allow him to go. During the depression, allowing an able- bodied grown son to go off to college when he could stay home and work at his father’s business was a major sacrifice. Don never forgot that one teacher had gone so far out of her way to open doors for him that would otherwise never have been opened. This helped shape his belief that good teachers, including good university professors, should have a sincere interest in the professional development of their students that extends beyond the lessons of the particular class they are teaching. And he also always appreciated the sacrifice that his parents made for him.

At DePauw, he was President of the Men’s Residence Hall Association, then the largest social organization on the campus. He and his residence hall compatriots dominated campus life, taking regular competitive awards in both academics and athletics. Because of their numbers, they also dominated campus elective offices. This was during the depression, and nearly all of the non- fraternity men at DePauw were there on scholarships. Nearly all of them also new the rigors of physical labor, having worked at least part-time on whatever jobs could be found or created through high school. They had every advantage except for money and social standing.

Don received his Bachelor of Arts degree in political science in 1936. He returned to Cincinnati, secured an internship with the city’s Waterworks, and began graduate work at the University of Cincinnati. He was working for the Waterworks during the 1937 flood. He later reported that he had learned the true meaning of public service from that experience. He was impressed with the dedication of the full-time employees with whom he worked, especially the Waterworks Superintendent, and with the sacrifices, including personal risks, that they took to insure the protection of the city’s fresh water supply and delivery system. Don was one of the last two people to be evacuated from the waterworks building on the Ohio River. He and the Waterworks Superintendent were taken by rowboat from the roof. They had not left until all of the pumps had been properly secured so that, once the emergency was over, the pumps would still be operational. This experience, more than any, cemented his early commitment to public service.

Don was among the first graduates of the University of Cincinnati’s Master’s program in Public Administration. Although the program was discontinued in the late 1990’s, in the late 1930’s it was seen as a progressive approach to assuring highly skilled professionals to manage public assets into the future. By the time he completed his graduate studies, Don was working full time for the City of Cincinnati.

December 7, 1941, presented what would become a significant interruption to his local career. Following the declaration of war, Don joined the U.S. Army, then was transferred to the U.S. Navy were he served as a lieutenant responsible for supplies for the Atlantic fleet. Like many others of his generation, Don received a serious course in world geography and international relations from World War II. But, when it was over he wanted to come home. He returned to Cincinnati and resumed work at City Hall.

In 1955 Don became Director of Personnel for the City, a position he held until 1968. He developed groundbreaking civil service testing procedures, introduced affirmative action planning and equal employment opportunity programs including effective minority recruitment programs, and served as Chief Labor Negotiator during that period. He became an early specialist in public sector labor relations, publishing four books on the topic.

Don also served as Acting City Manager any time Cincinnati’s City Manager was unavailable, attending City Council meetings, meeting with representatives of press, or handling other events as needed. During part of his service, he worked for C.A. Harrell, a very highly respected City Manager. At that time, Mr. Harrell and other officials decided that it would be good to use available television broadcast time on Saturday mornings to offer a program that would highlight events in city government. Since Mr. Harrell actually did not care to appear on television himself, Don Heisel became a regular, discussing current issues or plans. He never really spoke about this media exposure, but there are a few folks around Cincinnati who remember it.

In 1968, Don retired from the City of Cincinnati and focused his energies on his adjunct position with the University of Cincinnati and a growing career as a consultant and labor arbitrator. At UC, he served as the Director of the Master’s Program in Public Administration, as the founder and Director of the Institute for Governmental Research, and for one year as the Acting Head of the Department of Political Science. As a professor, Don believed that the most important mission of any university was to provide a quality undergraduate education. With that in mind, while Acting Head of the Department of Political Science, he notified all faculty that they could expect to teach at least one section of the general American Government class. Don actually believed that anyone with a bachelor’s degree in anything from any accredited university in the United States should be qualified to teach American Government. He saw government as that basic and that important.

Don Heisel loved the American experiment in democracy, and believed firmly that all Americans should understand and appreciate it. He also believed that that experiment was best evidenced in the workings of local government. He often quoted the phrase, “All politics is local,” as both mantra and reminder of the importance of local public service delivery. And he loved local public servants. Having been one himself, he well understood the challenges of working and living, as he often put it, “in a fishbowl.” He understood better than most that local public servants need to have a set of skills available to them to help in balancing often competing interests. He understood that it is often difficult to determine which of a competing set of needs to address in which order. And he understood that it is especially important to have access to information, including the experience of others, that can be used to inform and guide decisions. And he assumed that most, if not all, of the students who came to the Public Administration Program would eventually hold management positions in local government somewhere. In fact, most who came were “in career” students, already holding positions in local government. It was therefore critically important that the Master’s Program in Public Administration present the student with as much experience that could be translated to the real world of local government as possible.

Don tried to maintain contact with former students. He continued to mentor those who desired it. He saved his grade books to help him remember people who might call him for guidance or a reference even years after leaving the program.

Don also believed firmly that public service attracted “some of the most ethical people you will find anywhere.” His experiences, not only in Cincinnati but also with other governments for whom he consulted, confirmed this belief. He felt himself to be surrounded by competent and dedicated professionals who were generally of the highest integrity. This was a great source of joy to him. He confided to me, his wife, that he knew that if he had pursued a career in the private sector he could surely have enjoyed greater financial rewards; his DePauw classmates certainly had and he had had the opportunity to go into business with two of them. But instead, he felt compelled to public service. And felt himself the richer for it, because he had been privileged to work with people of the highest integrity and commitment to the public good.

Don served as a consultant to numerous public sector organizations, including the National Government of Iran (1975-1976), the States of New Jersey and Ohio, and many cities, counties, and townships. He provided testimony on personnel management issues before the U.S. Congress on the revision of the U.S. Civil Service Commission that resulted in the establishment of the Office of Personnel Management. He testified before the Ohio and New Jersey legislatures. And he served as a member of the Task Force on Public Sector Labor Relations for the National Governor’s Conference from 1967 to 1970.

In addition to his service to the University of Cincinnati, Don served as an adjunct professor at Xavier University (1982-1986) and as a preceptor to Nova University (DPA program) (1975-1984) teaching public personnel administration and related courses.

The purpose of the W. Donald Heisel Scholarship is to encourage a commitment to excellence in public service, continuing the legacy of Don Heisel’s commitment to his students and to his community. The fund is managed by the Board of Trustees of The Center for Local Government.